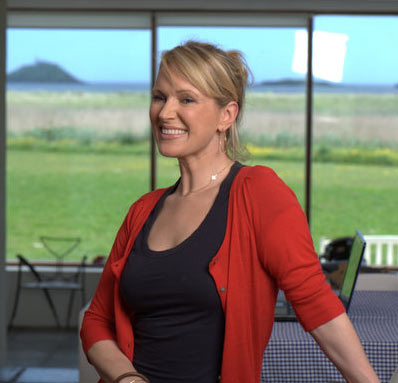 Over the years Rachel has become a well-known figure in the food world with her best selling cookery books, television programmes and food writing.

In short about myself.

Rachel Allen is a professional cook and busy mother.  Brought up in Dublin, at the age of eighteen she left to study at the world famous Ballymaloe Cookery School. After graduating she worked in the kitchens at Ballymaloe House, then returned to work at the cookery school where she found her passion in teaching and where she continues to teach each week.

Over the years Rachel has become a well-known figure in the food world with her best selling cookery books, television programmes and food writing.

Rachel’s first book, Rachel’s Favourite Food, was published in 2004 alongside a television series of the same name. A prolific author, she has published a wide range of popular cookbooks, including Bake, Easy Meals, Cake, Rachel's Everyday Kitchen, and most recently All Things Sweet each with an accompanying television series. Rachel’s books have sold in excess of 1 million world wide. Her popular television series for RTE and the BBC have been broadcast internationally in 27 different countries. Rachel was also co-host of Good Food Channel’s Market Kitchen and frequently appears on BBC's Saturday Kitchen.

Rachel’s recipes and writing have been published in a huge range of magazines and newspapers. Her weekly column in The Irish Mail on Sunday followed on from a column in the Sunday Tribune and she is a frequent contributor to - among others - Delicious, Olive, BBC Good Food and Food & Wine Magazine.

In addition to her cooking, Rachel has designed a successful range of home and tableware with Tipperary Crystal. As well as this Rachel has released a number of children’s cooking appliances.

Rachel lives by the sea in Shanagarry not far from Ballymaloe Cookery School with her husband Isaac and their three children, Joshua, Lucca and Scarlett.

Swiss Roll with Strawberries and Cream With Rachel's Demonstration Video

Dessert of the Day

Baked Chicken with Lemon and Garlic and Pilaf Rice

Sweet Treat of the Day

Sweet Treat of the Day