Don’t we all love a big bowl of colcannon. This comforting dish flecked with cabbage or kale can be a meal on its own or accompaniment. 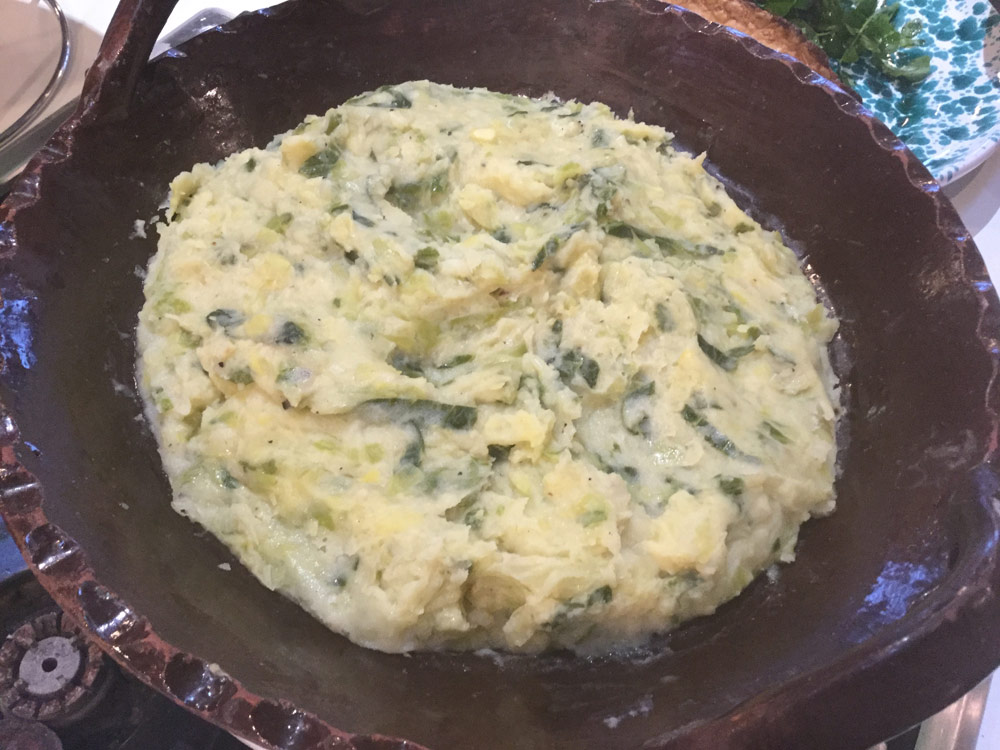 Did you ever eat colcannon

When'twas made with yellow cream

Did you ever scoop a hole on top

To hold the melting lake

Which your mother used to make?

Scrub the potatoes, put them in a saucepan of cold water, add a generous pinch of salt and bring to the boil. When the potatoes are about half cooked, 15 minutes approx. for 'old' potatoes, strain off two-thirds of the water, replace the lid on the saucepan, put onto a gentle heat and allow the potatoes to steam until they are cooked.

Remove the dark outer leaves from the cabbage. Wash the rest and cut into quarters, remove the core and cut finely across the grain. Boil in a little boiling water or bacon cooking water until soft. Drain, season with salt, freshly ground pepper and a little butter.

When the potatoes are just cooked, bring the milk to the boil. Pull the peel off the potatoes and discard, mash quickly while they are still warm and beat in enough boiling milk to make a fluffy purée. Then stir in the cooked cabbage and taste for seasoning.  For perfection,serve immediately in a hot dish with a lump of butter melting in the centre – the texture should be soft but not quite flowing.

Colcannon may be prepared ahead up to this point, covered and reheated later in a moderate oven 180ºC/350ºF/Gas Mark 4, for 20-25 minutes approx. Add the butter just before serving

Cover closely while reheating so it doesn't get too crusty on top.

If you have a food mixer, using to paddle.  Peel the potatoes directly into the bowl of the mixer while still hot.  Meanwhile, heat the milk, turn on the machine for 30 seconds to a minutes, this will roughly mash the potatoes.  Add some boiling milk and continue to beat until light and fluffy.  Season with salt and freshly ground black pepper.  Add a nice chunk of butter.  Beat for another few seconds.  Add the well-drained cooked cabbage or kale.  Taste and correct the seasoning.  Serve immediately or reheat and serve in the traditional way with a lump of butter melting in the centre.

Good to know if there is any colcannon leftover – shape into potato cakes, fry in a little melted clarified butter on a medium heat until golden on both sides.  Hey presto – you’ve got Bubble and Squeak.