Darina Allen: How to grown your own veg, use leftovers and live sustainably

‍By Joe McNamee Taken from The Examiner - Saturday, May 23, 2020 - 12:30 PMFrom growing your own, to cooking with leftovers, Darina Allen has been advocating a sustainable approach to food for decades now. We are finally listening, writes Joe McNamee 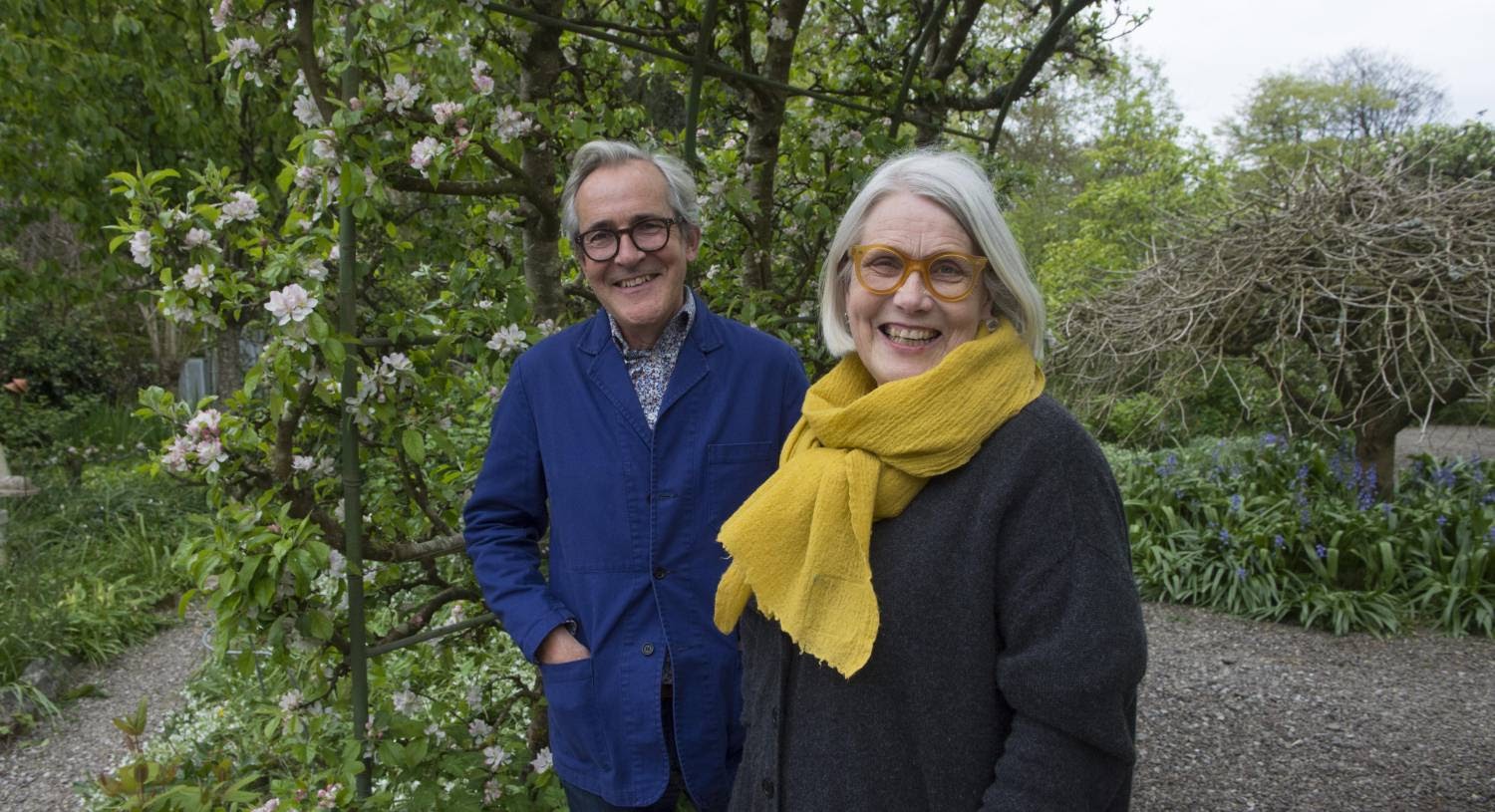 One rare yet deeply significant positive of the Covid-19 lockdown in Ireland may well be the triggering, for the very first time, of the beginnings of a truly sustainable Irish food system.

In times of crisis, it is a primal human instinct to seek comfort; food is one of the most universal comforts of all. The much-reported surge in grocery shopping during the initial weeks—up 37%—was initially attributed to panic buying and stockpiling, but it soon became apparent consumers were not just anaesthetising themselves with junk food and alcohol but actually cooking and eating in a far more considered fashion.

Mindless consumption was being replaced by a more questioning approach, increasingly querying the production, sourcing and delivery of our food, questions driven as much by health and nutrition and a growing awareness of those who produce our food, as more usual shallow infatuations with fashionable flavours and visual fancies.

We rolled back the decades to cook and bake like our parents and grandparents, spurning quick readymade options, preparing entire meals from scratch. We began to truly appreciate superior fresh local, seasonal produce, for nutritional value as much as taste.

We began to understand savings made by purchasing cheapest options on supermarket shelves often come at deeply damaging expense to those small and medium-sized farmers and growers producing our food, even as the industrial agriculture sector and the giant multiples reap greater and greater profits, year on year.

We began to realise that so many of these same farmers, growers and specialty producers were firmly embedded in our own local communities and, in supporting them, particularly, through direct selling ‘at the farm gate’ or some similar model, we were supporting our communities, ourselves and each other. And we began to recognise the industrial food sector had often been doing exactly the opposite for a long, long time.

New research, conducted across 11 European countries, including Ireland, by the Belgian University of Antwerp, has confirmed much of the above: we are now eating healthier meals, consuming more fresh fruit and vegetables, cooking more, wasting less and, as lockdown has exceeded the six weeks necessary to establish new habits, this change will remain permanent for a significant number.

There are certain people in this country, however, who have lived and promoted a truly sustainable food system for decades, and, at the head of the charge, have been Darina Allen and her brother Rory O’Connell. Together, they founded the now internationally renowned Ballymaloe Cookery School, in 1983, and remain disciples of the sustainable food philosophy of late great Myrtle Allen, herself a global innovator in this sphere.

Blás na hÉireann (The Irish Food Awards), also strong supporters of the small and medium specialty food producer sector, have announced their Producer’s Champions for 2020 as Darina and Rory, along with Darina’s daughter-in-law, Rachel Allen, who began as a student at the Cookery School, eventually joining them as a teacher. That the trio has been selected for acknowledgement, by the producers themselves only copperfastens the intrinsic value of this thoroughly deserved accolade and recognises their work in trying to achieve a truly sustainable Irish food system.

When we had to close the [cookery] school on Friday March 13, the students were in week ten and were so sad leaving and missing the last two weeks, but we had to reinvent ourselves. We have 55 employees and we realised the biggest need was for local food. We have always had the Cookery School shop and sold the food from the farm but we expanded it completely and removed anything that wasn’t food, the cookbooks, tableware, cooking equipment, took out some shelves for distancing and made it only food and we also set up a branch of Neighbourfood [the online farmer’s market].

Then we talked to the staff and explained to them that our aim was to feed the community and to provide an outlet for local farmers and food producers, especially with the markets closing, though the hens keep laying and the veg keeps growing.

With Neighbourfood, we could hardly cope. We turned the demonstration area and the dining room into loading bays [for baskets containing each individual order]. Saturday’s Pizza was turned into a takeaway. Any staff who wanted to isolate to be with a family member or whatever left but the rest stayed on. All the farm and garden staff stayed on, continuing to work on future harvests and the kitchen staff split in two, dividing into shifts between the gardens and the farm and the kitchen, with just two cooks in each of the five kitchens which would formerly have held 18 students, and they cook food for takeaway from the shop, to be sold alongside all the veg and fruit, the breads, the cheeses, the dairy, plants for people to transplant, even organic beef from the farm.

Early on we started contactless delivery free within a five mile radius to the cocooned and you cannot imagine the actual response from the local community to the shop and Neighbourfood. We’ve been trying for years to encourage this but there is a sea change in attitudes and a new appreciation for local food.

There are people who live between us and the village, less than a quarter of a mile, who had never been up to the farm shop before and are suddenly discovering the treasures in their own parish: cheese, milk, duck and so on. And they keep coming back and saying, it tastes so good.

We have a wonderful team who put their shoulders to the wheel and everyone is enjoying it and out of the 55, we have 29 still employed, all getting the hours that they want.

And beyond the farm and the school, though I’m cocooning, I’m still in touch with the wider world and, despite the tragedies, it’s fantastic that people are spending so much more time in the kitchen and maybe passing it on to their children.

I had a woman call me, whom I’d given my number to before, a top CEO—I’m not joking when I say she could run the country, a hugely capable woman. Her husband is also a top CEO and they’d typically leave their kids in the morning in PJs and see them in the evening in PJs and at the weekends they’d all eat out for breakfast, lunch and dinner. And she rang me on the phone in tears because she suddenly had to cook 21 meals a week and doesn’t know how to boil water.

This can’t ever happen again. Too many people can’t feed themselves, can’t cook, can’t fend for themselves, what Aboriginal grandmothers would call ‘illiterate’ in terms of their ability to look after themselves. It’s absolutely crucial that no child leaves school with a leaving cert without also carrying a certificate saying they’ve taken an exam that proves they can cook for themselves. Being able to cook for yourself is one of the most fundamental foundation stones of living a properly sustainable life, that and knowing where to find the right food, the proper ingredients.

We were absolutely thrilled to be chosen as Blás Producer Champions but to chosen by the producers themselves was extra special and it also a posthumous award really for Myrtle [Allen] as well. Decades before anyone was talking about buying local she was doing it and also built up an incredible network of producers for Ballymaloe and to this

Since the lockdown, so many things have come into a sharper definition. For someone always involved with food, whose always loved it and always cared about the people from whence it came, regarding them as much more than food producers, artists, creators, even heroes, not just now but all the time, I’ve always thought that maybe we take this amazing output, this incredible produce for granted. There’s been some shocking carry on and all of us had some part in it but I would hope this virus and the lockdown teaches us lessons about what we have and what we should be valuing and protecting.

Right now, the birdsong is positively astonishing, there is an increase in flies, bees, bugs — it is not that we were not looking before but it’s different now. At what point does it become not just about ‘different’ but a priority for the future, that we take our responsibility to the natural world and for its sustainability far more seriously.

We know we do not control nature but we do damage it and it will get very upset with us if we do not mind it. It is our responsibility to those who have gone before us and please God those who will come after us.

Maybe some of the pain of separation from friends and loved ones can be assuaged by us taking more responsibility in the future, thinking about it deeper, even finding the spirituality in the situation.

I love to cook, the soil the whole process, it is just my bug, and to be honoured by the producers is extra special. I value these people who give me such magnificent tools to work with and we’re all winners, all the amazing people doing so well with a light touch, sustainable touch on the planet.