I think the unexpected flavours here are delicious. 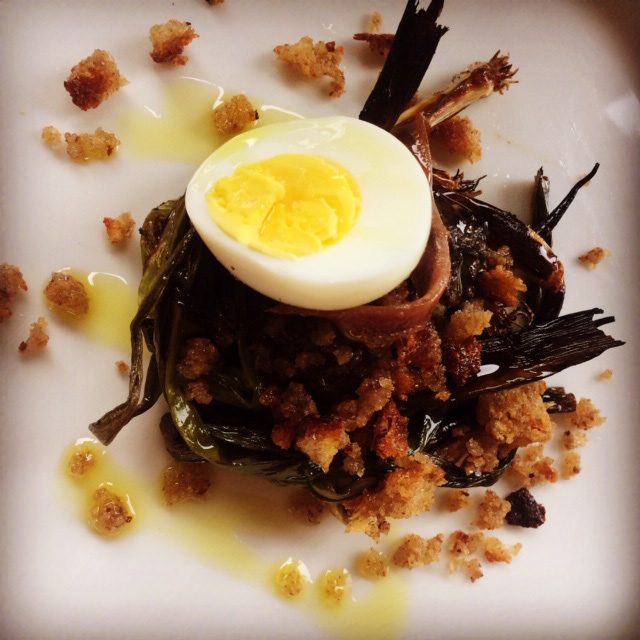 You will need to be brave when grilling the scallions as it is crucial to leave them under the grill for long enough for them to both tenderize and colour sufficiently. I like the green ends of some of the scallions to be cooked until quite charred. As this dish is being served as a starter in this meal, I have allowed just half an egg per serving. If you would like to serve this as a lunch or supper dish you could serve one egg per person and instead of the hard boiled egg suggested here, I sometimes served a soft poached egg and that is very good too.

Preheat the grill element in your oven, or failing that, preheat an oven to the highest heat possible, although the direct heat of the grill produces the best result.

While the grill is heating up, hard boil the eggs by lowering them gently into a saucepan of boiling salted water and cooking them at a boil for exactly 10 minutes. If you don’t want the yolk to be completely hard, cook for 9 minutes. Remove from the saucepan immediately and cool under a cold running tap. Remove the shell and cut the hard-boiled eggs in half lengthways.

Toss the spring onions in 2 tablespoons of the olive oil and season with salt and pepper. Place in a single layer on a baking sheet and place under the hot grill. Cook them until completely tender by which timesome of the spring onion ends will have become slightly charred. This is crucial for the finished flavour of the dish. This takes about 7 minutes under my grill, it might take longer in yours, but it is unlikely to take less time. I turn them with a tongs 3 or 4 times during the cooking to ensure a good result. When the spring onions are sufficiently tender and coloured, remove from the sheet and allow to cool to room temperature, though they are very good served warm.

Tomake the pangrattato, toss the breadcrumbs in the olive oil and spread in an even layer on the sheet the spring onions were cooked on. Place under the grill or in the hot oven and allow to become crisp and coloured to a hazelnut shade. This should only take a matter of minutes. I usually turn them once or twice during the cooking. Be vigilant here as they will crisp and colour quickly. Onceready remove and keep aside.

Heat 1 tablespoon of the olive oil in a frying pan set over a moderate heat and add the mushrooms and thyme leaves. Season with salt and pepper and fry for about 8 minutes, until juicy and cooked. Tip them into a food processor along with any cooking juice and allow to cool slightly for 5 minutes. Add the chopped anchovies and blend. Add the remaining tablespoon of oil and the water and blend again to achieve a puree that does not need to be completely smooth. Taste and correct seasoning.

To assemble the dish place a circular tangle of 6 spring onions on each plate. Place a dessertspoon of the mushroom puree on top followed by½ a hard boiled egg and a whole anchovy. Sprinkle over some pangrattato and finish with a small drizzle of excellent olive oil. 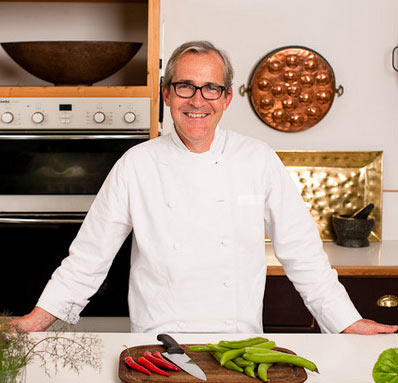 This is a recipe by
Rory O'Connell
View all my recipes